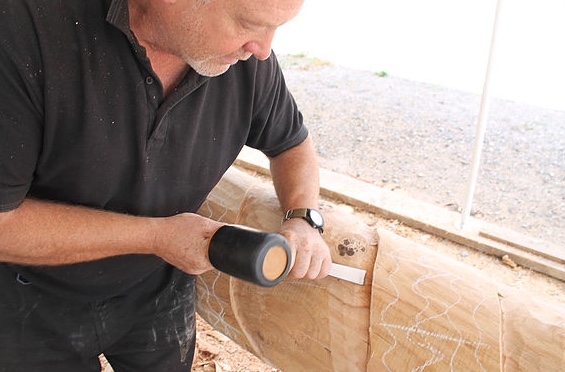 Simon Clement’s original degree was in Ceramics at Loughborough School of Art where he developed a style of sculptural wheel thrown pottery that concentrated on the colour and texture of fired clay rather than glazes. This interest in the inherent nature of material has remained a constant theme through all his work.

After a period as a self employed potter and teacher Simon found himself working in the wood working industry as a mast and spar maker for classic wooden boats. He took a two year sabbatical from masts and spars to do a Post Graduate course in Historic Wood Carving and from there developed a career in sculptural wood carving.

He now works from his workshop at the Sylva Woodcentre in Oxfordshire and specialises in large-scale carvings in wood often as intrepretive sculpture for public works. His current project is a prestigious commission from the Woodland Trust to carve 11 interpretive columns in Oak to celebrate the 800th anniversary of the Woodland Charter; these 1.5 ton oak posts are being placed at specially chosen sites across the United Kingdom.